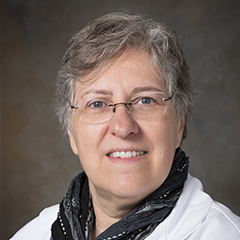 Dr. Patricia LoRusso has been a practicing academic medical oncologist performing clinical/translational research in early phase clinical trials for 30 years, spending the first 25 years at Wayne State University/ Karmanos Cancer Institute in Detroit, MI and transitioning to Yale University/Yale Cancer Center in 2014. Both institutions have NCI comprehensive designation status. She has had continuous NIH/NCI peer review funding for 28 years, having held a U-grant for early phase clinical trials through the NCI Cancer Therapy Evaluation Program (CTEP) for 26 years. She has also collaborated on numerous other grants and have been an investigator in P01 and P30 funding mechanisms. Understanding the need for team science, she has participated in P50 mechanisms and has been awarded team science grants through such organizations as Stand Up to Cancer (Co-Leader: Melanoma Dream Team), the Department of Defense (DOD) and the Komen Foundation (Co-leader, KG111063: Targeting Stem Cells in Triple-Negative Breast Cancer (TNBC) in Different Racial Populations).

In addition to serving in NCI positions, Dr. LoRusso has served in leadership positions of several other organizations. She has served on the Board of Directors and numerous scientific and education committees of the American Association for Cancer Research (AACR), the education and scientific committees of the American Society of Clinical Oncology (ASCO), and the steering committee for the Food and Drug Administration (FDA) Accelerating Anticancer Agent Development and Validation Workshop. Internationally, she has taught several clinical trials educational workshops, educating many physicians and scientists across the globe. She understands how critically important it is to train the next generation of early career investigators to be knowledgeable and proficient in clinical and translational research by providing them leadership opportunities and mentoring. She has worked closely with Cancer Research United Kingdom (CRUK), a UK Welcome Trust which is the second largest funding agency for cancer research. She is currently serving a 3-year term as the chair of their New Agents Committee (NAC), reviewing international proposals relative to drug development of novel agents.

Working closely over the past 3 decades with patients suffering from advanced malignancies, Dr. LoRusso has become an advocate, not only for cancer researchers and clinicians, but more importantly for the patients and their caregivers. Having experienced at a young age the death of her own parents from cancer, she understands the urgent need for new cancer discoveries and the potential for longevity and quality of life.