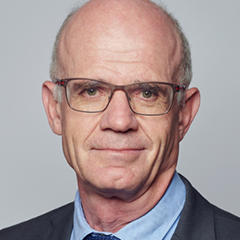 Dr. Marc Bonneville is also Chairman of the Alliance for Research and Innovation in the Healthcare Industries (ARIIS).

Dr. Marc Bonneville originally joined Institut Mérieux in 2013. A specialist in immunology, cancer and infectious diseases, he was formerly director of the LabEx ImmunoGraftOncology, Director of the Pays de la Loire branch of the French blood bank, Director of the Nantes/Angers INSERM Cancer Research Center and head of research at the CNRS. He has authored numerous scientific publications and holds collective responsibilities in national and international research.

Dr. Bonneville began to work on transplantation immunology in Nantes (France) in 1983. Between 1987 and 1989, he specialized in mouse cellular immune responses during his postdoctoral training in S. Tonegawa’s laboratory (MIT, Boston). In 1990, he joined INSERM where he held various managerial positions for over 15 years. In 2013, he was appointed Chief Scientific and Medical Officer at the Institut Mérieux, a biopharmaceutical holding dedicated to the development of diagnostic and therapeutic tools in the fields of infectious diseases, cancer and food safety.

Since 2016, he serves as Chairman of the Alliance for Research and Innovation of Healthcare Industries (ARIIS). The purpose of this professional organization affiliated to the French Health Industry Federation (FEFIS) is to break down barriers in private research and promote synergy between drugs, medical technology and diagnostics in both human and veterinary medicine. The ARIIS intends to create an environment which is conducive to innovation in cross-disciplinary health sectors such as digital health, decentralized diagnostics and the One Health concept which encompasses areas such as nutrition and antibiotic resistance.

Dr. Bonneville has authored over 200 scientific papers and co-signed 8 patents. He also co-founded Innate Pharma SA, a biotech company that implements new immunotherapies targeting innate lymphocytes in infectiology and oncology. He is involved in over 30 national and international scientific advisory boards and evaluation committees.