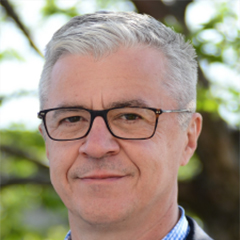 Mr. Knopf brings over 25 years of experience as a senior business development executive from both large pharmaceutical and emerging biotechnology companies, with a recent focus on transactions and collaborations in the areas of immunology and oncology.

In his most recent positions, Mr. Knopf was Chief Business Officer at Gemini Therapeutics and Pieris Pharmaceuticals. During his tenure at Pieris, a NASDAQ-listed biotechnology company developing biotherapeutics for IO and respiratory diseases, he supported the successful closing of several transformative, multi-program partnering deals with large pharmaceutical companies. Prior to that, he was Senior Vice President Business Development & Licensing, M&A for Baxter BioScience, and the spin-off Baxalta, where he supported the expansion of the oncology business and pipeline and strengthened the company’s hematology and immunology divisions. He also spent 12 years at Novartis in various leadership, business development and licensing roles in Europe and the United States. During his time at Novartis, he completed an extensive range of acquisition, licensing and collaboration agreements in support of building the Novartis Global Product Portfolio.

Mr. Knopf holds a Master of International Business Studies from the University of South Carolina, Darla Moore School of Business and a BA in Economics from Manchester College.